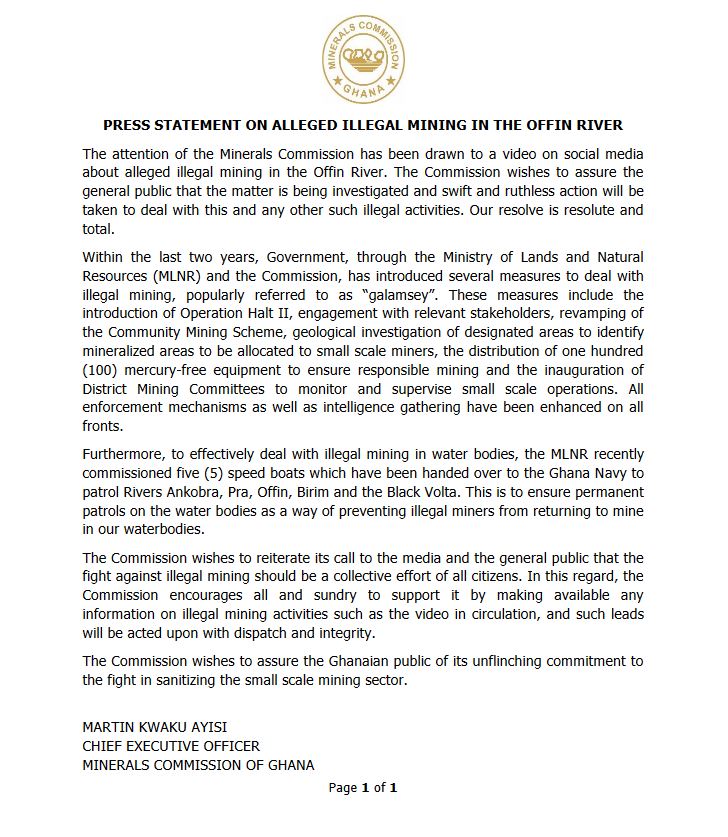 PRESS STATEMENT ON ALLEGED ILLEGAL MINING IN THE OFFIN RIVER

The attention of the Minerals Commission has been drawn to a video on social media
about alleged illegal mining in the Offin River. The Commission wishes to assure the
general public that the matter is being investigated and swift and ruthless action will be
taken to deal with this and any other such illegal activities. Our resolve is resolute and
total.
Within the last two years, Government, through the Ministry of Lands and Natural
Resources (MLNR) and the Commission, has introduced several measures to deal with
illegal mining, popularly referred to as “galamsey”. These measures include the
introduction of Operation Halt II, engagement with relevant stakeholders, revamping of
the Community Mining Scheme, geological investigation of designated areas to identify
mineralized areas to be allocated to small scale miners, the distribution of one hundred
(100) mercury-free equipment to ensure responsible mining and the inauguration of
District Mining Committees to monitor and supervise small scale operations. All
enforcement mechanisms as well as intelligence gathering have been enhanced on all
fronts.

Furthermore, to effectively deal with illegal mining in water bodies, the MLNR recently
commissioned five (5) speed boats which have been handed over to the Ghana Navy to
patrol Rivers Ankobra, Pra, Offin, Birim and the Black Volta. This is to ensure permanent
patrols on the water bodies as a way of preventing illegal miners from returning to mine
in our waterbodies.
The Commission wishes to reiterate its call to the media and the general public that the
fight against illegal mining should be a collective effort of all citizens. In this regard, the
Commission encourages all and sundry to support it by making available any
information on illegal mining activities such as the video in circulation, and such leads
will be acted upon with dispatch and integrity.
The Commission wishes to assure the Ghanaian public of its unflinching commitment to
the fight in sanitizing the small scale mining sector.